What is Ebola Virus?

What is Ebola Virus?

The Filoviridae family has two specific genera: Ebola and Marburg viruses.   Although there is no such exact scientific name for ebola virus, yet it gets its name from the Ebola River Valley in Zaire (presently being renamed as Democratic Republic of Congo). For those enquiring as to who discovered ebola virus, the answer lies in the fact that it was discovered by Dr. Ngoy Mushola.  It is responsible for causing ebola hemorrhagic fever disease (EHF) in humans and primates which causes the destruction of blood vessels and problems related to the coagulation of blood.

Types or Classification of Ebola Virus

Within the ebolavirus genus, there are five different recognized species which can be distinguished on the basis of their genetic sequences and the immune reaction they evoke in different individuals. They can be categorized as under:-

Ebola virus outbreaks took place for the first time in Yambuku, Zaire in the year 1976. The virus causing such outbreaks has been named as the Zaire ebola virus. It is the most dangerous species of ebola virus that has claimed that has had the largest number of ebola virus victims which has led to the highest number of ebola virus deaths. Its symptoms include a chilly feeling accompanied with high fever which shares its similarity with the symptoms of malaria. The basic cause believed to lie behind the spread of the disease is the reuse of the same needle initially used for Lokela’s injection without sterilization. Ebola virus transmission may also be attributed to the unhygienic and poor traditional burial method that was followed by the South African tribes. This has resulted in the occurrence of the disease more than once in Congo, Gabon and other places in South Africa.

For those who want to know as to what is Ebola Reston virus must be enlightened with the ebola virus fact that it was discovered in 1989 in Reston, Virginia. Although it is non-pathogenic to humans, yet it has been found to affect primates such as monkeys. Subsequently Ebola Reston virus outbreaks have occurred in Texas and Italy. Interestingly Ebola Reston virus in pigs has been detected very recently with its outbreak in Philippines.

Also known as Tai ebola virus, the origin of Ivory Coast ebola virus can be traced to the Tai forests of the Côte d’Ivoire in Africa, where the outbreak of this virus took place for the first time in 1994. The initial outbreak was among the wild African chimpanzees from whom it is believed to have got transmitted to humans during the process of conduction of necropsy on the dead body of the infected chimpanzees who had contracted the same.

An outbreak of ebola virus disease in the Bundibugyo district of Uganda in 2007 and 2008 led to the detection of a species of ebola virus that was hitherto unknown. The ebola virus was named after its place of outbreak for the first time and there were at least 100 or more ebola virus victims.

Signs and Symptoms of Ebola Virus 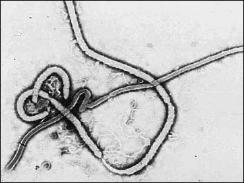 Image 2 – Ebola Virus Picture
Source – cbsnews
The period of incubation for ebola virus hemorrhagic fever is usually 5 to 18 days but may extend from 2 to 21 days depending on the type of virus that one contracts. The Ebola virus symptoms hemorrhagic disease that is generally noticed in individuals contracting the viral disease are high fever, nausea and vomiting, headache, muscular pain, malaise, inflammation of the pharynx, and diarrhea accompanied with bloody discharge, and the development of maculopapular rashes along with bleeding at other body orifices. Besides these, abdominal pain, joint pain, chest pain, coagulopathy, hiccups, low blood pressure, sclerotic arterioles, purpura, petechia are the other symptoms that are particular to the species of Zaire ebola virus and Sudan ebola virus. This kind of reference to these two particular species of virus is due to the fact that the other three species of ebola virus are either non – pathogenic to human beings or have very few cases to facilitate the detection of its symptoms. 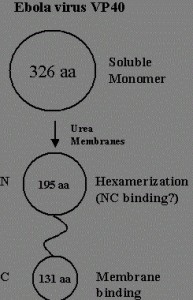 Picture 3 – Ebola Virus Diagram
The structure of Ebola virus is actually thread-like in nature as is common for all viruses belonging to the family of filoviridae. The ebola virus facts suggest that the size of ebola virus VP30 is actually 288 amino acids in length. The ebola virus virions may vary in terms of their shape and size. They may be in the form of a coil, circle, and branch or may also appear in the form of a U or a 6. By size they are generally 80 nm in diameter but may extend from 800 to 1000 nm in several cases. The virions are surrounded by a bilayer of lipid molecules that anchor and protect the glycoprotein projecting long spikes from its surface which are usually 7 to 10 nm long. This outer layer of the virion is called the envelope. Within the virions are bound the neucleocapsids, which are usually 80 nm in size and contain genomic Ribonucleic acid along with viral proteins such as  VP35, VP30, NP and L. The nucleocapsid contains a central channel of 20-30 nm in diameter. The viral proteins VP24 and VP40 are located in the space between the glycoprotein envelope (GP) and the nucleocapsid of the virion, called the Matrix. The true structure of ebola virus can be obtained with the help of electron micrographs.

The ebola virus information about its hereditary or biological composition has been discerned with the help of modern scientific research with the help of advanced scientific tools and equipments. A single virion of ebola virus contains a molecule of negative sense RNA, which is single stranded and linear in shape. The length of the molecule may extend from 18,959 to 18,961 in length. Within it, the 3’ terminus is the leader which is actually not polyadenaylated. Then follows the non structural proteins or the NPs such as VP35 and the VP40 and the glycoproteins, namely VP30, and VP24. The order ends with the terminus 5’ which is actually capped. The exactly 472 and 732 nucleotides that have been found from the end of 3’ and 5’ terminus are capable of carrying signals that are vital in controlling transcription such as that of the viral genome from the RNA dependent polymerase to the mRNAs. . These nucleotides are also vital for ebola virus replication and facilitate the process of packaging of the viral genomes into newly formed virions. The genomes are non infectious and so do not cause ebola virus infections. The NP and L genes have been identified as endogenous in the genomes of some mammals.

Photo 4 – Ebola Virus Replication
Source – stanford
The ebola viruses are actually acellular in nature and as such do not have the possibility of growing up themselves. They compensate this incapability of themselves by using the cell of the host for the purpose of multiple production and reproduction. The initiation of the mechanism is done by the ebola virus by attaching itself to the receptors of the cell of the host. This is done through the glycoprotein called the surface peplomer by engulfing the protein molecules and forming a vesicle around the host cell. This process is known as Endocytosis. After this, the ebola virus releases the nucleocapsid into the cytoplasm of the host cell and it also begins surrounding the capsid of the host cell.
In this process, the negative ssRNA helps in the synthesis (3’-5’) of monocistronic, polyadenylated mRNAs. This also translates the mRNA into viral proteins. Next the viral proteins are processed and the glycoprotein precursor is cleaved into the glycoprotein molecules of the types 1 and 2. These glycoproteins have already undergone the enzymatic process of attaching glycans to proteins which is known as the process of Glycosylation. The two different glycoprotein molecules assemble together to form Heterodimers, which are actually made up of two similar but not exactly identical molecules. Then the molecules multiply to form a trimer and proceed to form surface peplomer which are located on the surface of the shell of the lipoprotein. The cell releases the secreted glycoprotein and the delta peptide.
With the rise in the levels of the vital protein, the process shifts from ebola virus transcription and translation to its replication. The +ssRNA is synthesized using the pattern of the negative-sense RNA and this further helps in the synthesis of a new genomic (-) ssRNA which is itself surrounded by a capsid. This leads to the formation of the neuclocapsides and the ebola virus envelope proteins with the plasma membrane of the cell of the host. Then the virus reproduces itself by the process of asexual reproduction called budding and this leads to the total destruction of the host cell.