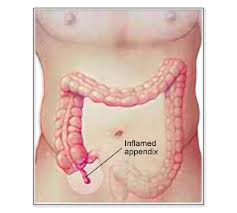 Appendicitis is an inflammation of the appendix, a finger-like glandular piece of tissue that connects to the beginning of the large intestine, usually at the lower right side of the abdomen. In older children, the classic symptoms of appendicitis are abdominal pain, fever, and vomiting. Abdominal pain usually begins in the center of the abdomen, around the area of the navel (“belly button”). Later, the pain may move downward and to the right – to an area called McBurney’s point, roughly corresponding to the location of the appendix in the lower right portion of the abdomen.
After his abdominal pain begins, a child with appendicitis usually develops a slight fever, loses his appetite, feels nauseous, and may vomit. The fact that abdominal pain begins before nausea and vomiting, rather than after, is one clue to suspect appendicitis rather than an intestinal infection 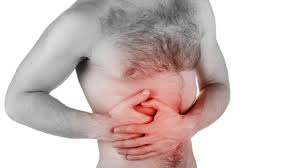 Other symptoms that may be seen in older children with appendicitis include: diarrhea (usually small stools with mucus); urinary tract symptoms (urinating very frequently and/or an uncomfortably strong urge to urinate); constipation; and, sometimes, respiratory symptoms.

Previous Self-Care at Home (Gastro)
Next Stomach pain after eating